Another rite of passage

It’s really true, GrandpaLyle’s Ark will launch from NW Arkansas again in July. Headed north for a couple days in the Chicago area, then on from there to somewhere.

The Ark was sidelined recently so I could take a stab at being young again. Let me explain.

About two years ago a job opportunity showed up in the mail that I was unable to ignore. Marie had the same reaction but more so. At first I had a hard time taking it seriously. Hell, I quit flying more than seven years ago. Beside, the job would be four hours away and I wasn’t even sure I still knew how to fly. Plus I’m more than 75 years old!

But Marie saw much more in me . . . and in this possibility. She coaxed and coaxed until I finally made a date to fly with Summit Aviation right here in Bentonville. I would bring my flying skills back up to speed then go get the job.

One side of my brain was almost cocky: “It’s like riding a bicycle.” But the other wasn’t so sure. Suffice it to say that after spending too many hours and too much money, I concluded that "not so sure" was the winner.

Fast forward a year. Summit Aviation had just moved to The Fieldhouse – easily the most spectacular light plane centric facility I’ve seen in nearly sixty years of flying. And they were hiring. But Summit was where I performed so miserably only a year ago. Hmmm . . .

Fortunately, I still had friends at Skill Aviation in Waukegan, IL, where I taught years ago. And knowing that I couldn’t have forgotten that much, I called and reserved their best plane for my reentry. Let’s just say my skills were rustier than I thought. I switched to something simpler. Still too rusty.

Back when I was teaching, my favorite task was working with a student who had become stuck – almost all of us do at some point in our training. I would fly with him or her and see if I could identify what the block was – then help work through it. And I loved it.

Reflecting on my own failure at instant recovery, I heard that very same teacher in the back of my head talking to a troubled student.

Teacher: What are you stuck on?

Student: I can’t even land an uncomplex airplane – one that I use to teach in – often.

Teacher: Is that the plane you’re most comfortable in?

Student: No. My favorite is the little Diamond I used ten years ago.

Finally, after five humbling hours in the little Diamond, I was allowed to solo. You’d have thought I was 19 years old and soloing for the first time. I was positively giddy.

Primary re-training over, I headed back to Arkansas. While I had been away, Summit Aviation had blossomed from a sleepy but superb flight school into a shining star. Facilities, aircraft, and management had changed overnight.

And they welcomed me. Chip Gibbons, Chief Fight Instructor, respected my concerns about age and the long layoff and proposed a limited schedule of beginning students. Still unsure of my personal skills, between lessons I rented a plane to restore my confidence – acting as both instructor and student.

It was working. Not as fast as I had hoped, but my confidence was slowly coming back.

Did I say slowly? Absorbing new technology, I looked like grandpa guided by his teenage grandson. My flying was safe but not as sharp as I remember – and I began to doubt that it ever would be.

A week ago this came to a head. Two days in a row I had minor lapses while flying. Is God telling me something? I googled, “How do you know it’s time to quit flying?” Hunter Heath and Richard Collins shared insights that offered just the guidance I needed.

The conclusion: I’ll not be flying as Pilot In Command again in this lifetime. After nearly sixty years, nearly five thousand hours, owning and flying some spectacular airplanes (I could go on and on and maybe I will sometime), my flight bag has moved to the attic . . . for good.

As I told Chip at Summit Aviation, I’m thrilled that Thaden Field is destined for stardom. I’m dreadfully saddened that I won’t be part of it. 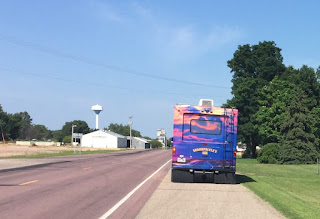 And I can hardly wait.

Posted by GrandpaLyle at 6:23 PM 3 comments: